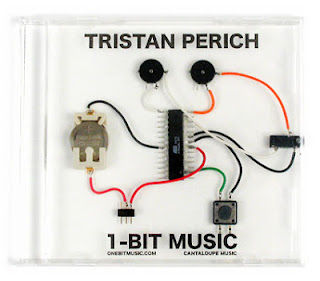 In recent years, the art of producing 8-bit music on 8-bit hardware has been enjoying a sort of renaissance thanks to the generations of kids that grew up with primitive video-game music like the themes from Zelda and Mario. The digital music created on today's modern computers is generally done in 16-bit or 24-bit, both of which allow for a much finer audio resolution and thus much clearer sound than 8-bit. Then there's 1-bit sound, which was employed in 70s and 80s computers such as the Apple II and early IBM PCs to produce rudimentary sound effects and music for video games. In those types of computers, a signal would be sent to a small speaker directly from the CPU which would result in a simple click sound, and since the speaker was either on (making sound) or off (silent), the single click produced was considered to be 1-bit of audio information. Put enough of these click sounds together in rapid succession while varying the oscillation and you've produced a sine wave, one of the building blocks of synthesized tones. Sweat enough blood and you can actually make music with it as did electronic music artist, Tristan Perich. While there are quite a few 1-bit music artists floating around out there on the net, Tristan has gone one step further and created a 1-bit music album, titled "1-bit Music," entirely in hardware. That is, rather than release a recording of his music on a modern format such as mp3 or CD, Tristan's album combines the player and the music into a portable unit which consists of a simple electronic circuit assembled inside a standard CD case. The case itself has a headphone jack mounted on the side that allows the listener to experience 40 minutes of 1-bit music in, as Tristan puts it, the lowest possible representation of audio. You can't buy the album anymore (bummer) but you can visit Tristan's sites and get a glimpse into some really innovative forms of music and visual art, much of which is produced using the same technologies as the album.