The new way to sound modern? Go retro!
(AKA: Timbaland has SIDS.)

New discovery raises question, "What will become of the grand tradition of popular music causing parents to cry out in pain, What is that noise? That's not music!"

None of this is in English, but you get the idea.

Does Spock Amuse You? Back in 1998, video game publisher, Interplay, was working on what would have been the final Star Trek game to feature voice work by the original cast called, Star Trek: Secret of Vulcan Fury. While development eventually stalled, Paramount Studios, owners of the franchise, saw the potential of Vulcan Fury's impressive CG animation and for a time, seriously considered producing a computer-animated Star Trek TV series with the original crew. Alas, due to various financial issues, neither the animated series nor the game were ever released and so now in 2013 we're stuck with these assh*les. Trailers of the game do exist and reveal that the graphics still hold up well even by today's standards. Thanks to a fellow fan, I found this somewhat rare test clip that claims to be taken from the un-produced Trek series, however since it's assumed that Paramount never actually got past the planning stages, the clip is most likely a test of the game itself. Watch it and witness a virtual Mr. Spock performing a classic scene from the Martin Scorsese's 1990 super-hit, Goodfellas. Enjoy!

The original Pac-Man game from Namco was an 80s classic and will always retain its crown as the top-dog of all video games. But if I could change one thing about it, it would be this: bigger boobs MORE MAZES. "So go play Ms. Pac-Man, you schmuck! It's got like four of them! (mazes, that is)" you brazenly respond. Well OK, Ms. Pac-Man's 4 mazes are definitely a step up from her old man's lone blue labyrinth, but it certainly doesn't hold a candle to this: 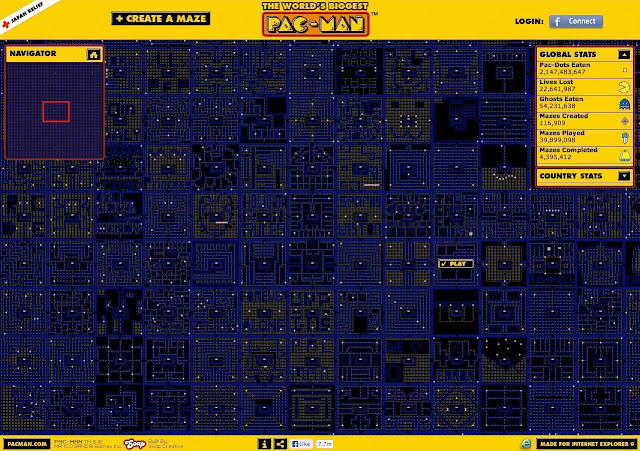 Yup, it's the world's biggest Pac-Man game and it was created entirely by ordinary netizens like you and me. Once logged into the site (using Facebook, of course), users can access a simple WYSIWYG editor that allows wanna-be game designers to create their own ultimate Pac-Man maze in just about any configuration they desire. When finished, the new maze is then is automatically linked to the existing collection of mazes via the escape tunnels, which, when entered, will transport the player's avatar to a whole new play-field, rather than just spitting him or her out of the tunnel on the opposite side (as was in the original game). The result of all of this effort is an endless, massive grid of interconnecting Pac-Man mazes that seem to go on forever. If you just want to play a quick game of dot-munch, however, and do not want to link your Facebook account to yet another damned website, you can do that too. There are plenty of unique mazes to start out on, each presenting its own twists and turns, while keeping intact the now-iconic sounds and sprites that make Pac-Man the game we all know and love.

One last thing. While I thought I'd never have to say this about any modern website built after Y2K, the site actually works best in Internet Explorer, and in fact (shudder), was designed specifically for it. So shut down your Chrome, Safari or Firefox and dig out that old M$ relic so you can get your digital noms on! Woof!

A big thanks to RetroGeeker fan, Cheryl, for tipping me off to this awesome, awesome site! Cheers!

Ever wonder what J.J. Abrams' Star Trek movie would look like as an 8-bit game?
Me neither. Watch this...

Sony has long been a company known for its high-technology and sexy, high-priced products and for the most part, they've been extremely successful at hawking their wares to the American public. However, when it comes to promoting technology industry standards or introducing new media formats, they've always had a pretty weak record. Rarely has Sony seen any of their top-tier technologies take over the world (I still can't believe Blu-Ray beat out HD-DVD) and if you don't recall any other fails than BetaMax (1975), let me refresh your memory: DAT (1987), MemoryStick (1998) and UMD (2005) are just a few of Sony's more well-known media formats which failed to take hold with the public. Now Sony has recently announced that as of 2013, they will finally cease production of their MiniDisc (MD) format which was introduced as the successor to analog audio cassettes some 20 years ago. "They still make those?" you shockingly ask. Yes indeedy-doddily-dew. Apparently, the customers in Sony's homebase market, Japan, took more of a liking to the MD format than anyone over on this side of the globe ever did and have tenaciously supported the mostly-ignored format for the last two decades. Sony stopped producing their portable MD players in 2011 but continued to sell and support MD home stereo systems to the remaining hold-outs and aficionados, squeezing out the last few drops of profit from that revenue stream. Now it appears that even those stalwart retro-techies who didn't move on to the iPod ten years ago will be forced to look elsewhere to store their digital data and music files. These folks won't be completely out of luck, however, as Onkyo and a few other electronics manufacturers have stated that they will continue to produce MD equipment for what is left of this increasingly anemic niche market. However without any further support from the original creators of the format, who knows how long that will last? So, for all intents and purposes, the MD is finally dead. RIP you expensive bitch.

BONUS VIDEO: WATCH JAMIROQUAI PIMP THE MINIDISC BACK THE 1900s.

How cool is this? Two Texan engineers, Hunter Smith and Ben James, have created a live-action Mario Kart game combining actual go-karts and the wonders of modern technology. "What's so great about that?" you brazenly ask. Well what's so great about that is that the game features collectible power-ups which are actually able to affect the performance of the cars in the race! RFID-embedded power-up boxes dangle over the track containing items like bananas and turtle shells which, when sensed by the in-car RFID reader, will tell the player's vehicle how to react. So for example, the mushroom power-up, when grabbed by a driver, will wirelessly activate motors that enable the go-kart to speed up!

“Ben and I grew up playing Mario Kart on Super Nintendo and Nintendo 64 so we’re both big fans,” Smith, the co-founder of Austin Texas-based Waterloo Labs, told Wired. We got the idea for the real-life Mario because we work with First Robotics Competition and they use same controller, software and motors. We got a few extra kits so we asked ourselves ‘What can we do with these competition kits that would be fun?”

The engineers have posted the system details and source code for the entire project on the Waterloo Labs website so anyone with access to the raw materials can build their own simulation, however it is regrettably noted that they currently have no plans to make it a permanent exhibit. Boooo!

As if there weren't already enough reasons already to buy an iPad, here's one more for you: the New Potato iPad Foosball Table. Just pop your iPad 1, 2 or 3 into this little sucker (iPad 4 has that wonky new connector so it won't work) and you're ready for some serious sweat-inducing, retro digital ball-kicking (ouch).

Check out some of the features:


And, what? It's only $99?! Well I've got that burning a hole in my savings account wife's purse pocket right now!

CLICK HERE FOR MORE INFO ABOUT THE iPAD FOOSBALL TABLE

BONUS VIDEO - SEE IT IN ACTION! 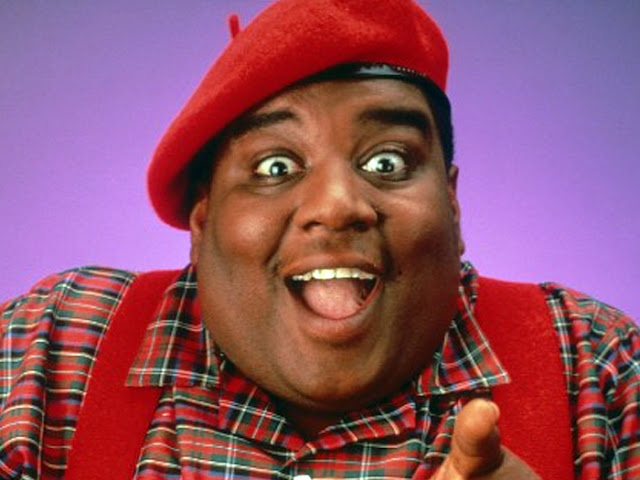 It's Monday. Here's the Rerun Dance. If you're too young to remember who Freddie Rerun Stubbs (a.k.a. Fred Berry) was, shame on you, and click HERE. R.I.P. Freddie.