Stuck On Retro, Cuz Retro's Stuck On Me 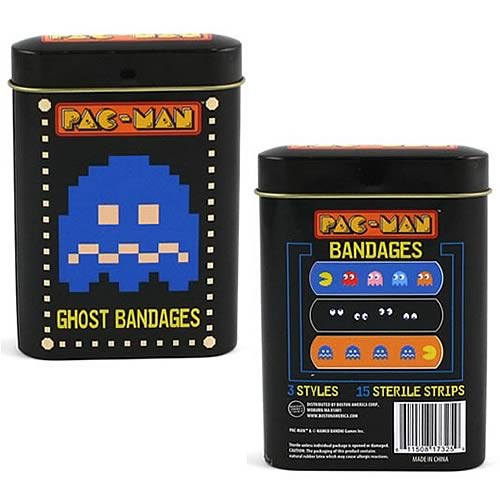 Self-adhesive bandages (Band-Aids). We use them all the time but they always make you look like a dork. So why not look like a nerd instead with these bitchin' Pac-Man bandages? Game on!

CLICK HERE TO BUY THESE FROM PERPETUAL KID
Posted by Marko at 4:05 PM No comments:

Return of Them Damned Jedis

With all of the talk about Star Wars Episode 7 coming our way, the hot question on everyone's lips has been whether or not the original heros from a galaxy far, far away would be rejoining the saga. And while just a few weeks ago, Carrie Fisher stated that she was on board with the new project, what everyone really wanted to know was if scoundrel and ladies man, Han Solo, would be returning to the big screen in the form of Harrison Ford. Well, this is where it gets tricky. Read on...

Ford told WGNTV, "I think it's almost true...I'm looking forward to it....It's not in the bag but I think it's happening."

...and in an interview with Bloomberg's business week master-creator George Lucas had this to say...

"We had already signed Mark and Carrie and Harrison -- or we were pretty much in final stages of negotiation. So I called them to say, 'Look, this is what's going on," Lucas said. "Maybe I'm not supposed to say that. I think they want to announce that with some big whoop-de-do, but we were negotiating with them. I won't say whether the negotiations were successful or not."

...of course, what would the Star Wars saga be without the chosen one himself (Mark Hamill), who chimed in with this...

"They're talking to us. George [Lucas] wanted to know whether we'd be interested. He did say that if we didn't want to do it, they wouldn't cast another actor in our parts - they would write us out. ... I can tell you right away that we haven't signed any contracts. We're in the stage where they want us to go in and meet with Michael Arndt, who is the writer, and Kathleen Kennedy, who is going to run Lucasfilm. Both have had meetings set that were postponed -- on their end, not mine. They're more busy than I am."

It sounds hopeful but who knows? Keep your fingers crossed and hope none of them dies of old age before they get to this next trilogy!
Posted by Marko at 3:24 PM 1 comment:

Birth of the game cartridge

The method of expanding a video system via game cartridges—still employed by today's handhelds Nintendo DS and Leapster—was first introduced in an obscure home system called the Fairchild Channel F. Released in the nebulous period after the glut of home pong copies, but before the Atari VCS, The Fairchild boasted some significant firsts for the home market. In addition to being the first system to utilize game cartridges, it was also the first home system that allowed 1-player gameplay against the computer; all previous home systems required 2 players.

The Fairchild Channel F eventually released 26 cartridges. Despite being the first of its type to market, it made only a blip (perhaps also a bloop) on the radar of videogame history. Having only half the RAM of 1977's Atari VCS (64 bytes) and games that were widely-regarded as "not much fun," the system died with little notice; few attended the funeral. In this video, The Irate Gamer, takes a humorous look at the Fairchild's dreary entertainment offerings.

Bonus points. If you enjoyed that video, be sure to check out Episode 3 of the Irate Gamer's History of Videogames, which uncovers the mid-70's coin-op hits you've never heard of, including Combat for Atari - a coin-op port of Tank.