Disney's 2012 animated epic, Wreck-It Ralph, paid tribute to many classic video games from the '80s and '90s by bringing to life some of the most beloved game characters of all time such as Q*Bert, Pac-Man and my personal fave, Tapper. However the main story centers around a fictional creation of Disney's called Fix-It Felix Jr., a game that most likely took inspiration from the legendary Nintendo hit, Donkey Kong. In it, our titular hero takes on the task of repairing a crumbling building while avoiding the wrath of the evil Ralph, who tries to take out Felix by hurling rocks, or clumps of dirt or something at him...you know these 8-bit games make it tough to tell, sometimes.

It's not a bad little game and I know because Disney went the extra mile of actually designing and programming the concept into a playable game which you can download for your iPhone, Android or Windows phone -- sorry Blackberry (kids be like, wtf is a Blackberry?) You can even play it on your home computer, as long as you have Flash. (kids be like, wtf is Flash?)

But because it was never actually a real arcade game, you retro game collectors out there can forget about getting your hands on a working model, unless one of those kit-bashers, game-hackers or MAME-floggers that live in your web browser decides to build one. I'm looking at you Ben Heck!

But until that day arrives, what you can do is stop by eBay and pick up a (relatively expensive) mini-replica of the arcade game itself. This decorative miniature doesn't actually let you play the game, but it does feature an LCD screen with a video loop and sound effects and would be a worthy addition to any geek's man-cave. The bidding starts at $70, which I think is a little steep, but if you're a fan of the film, this is one collectible that you probably won't find anywhere else.

CLICK HERE TO PLAY THE GAME ONLINE FOR FREE
Posted by Marko at 8:32 PM 8 comments:

High Def is for suckers.

You wanna be like Marty McFly and document your time traveling adventures in true 80s style? Then pick up this bitchin’ app and you’re halfway there, minus the DeLorean Motor Car.

VHS Camcorder is a $3.99 app for iPhone, iPod and iPad that lets you go back to the days when 333 lines of video resolution were more than enough to capture all those awkward coming-of-age moments that you still spend each waking moment of every day trying to burn from your mind. Everything you need to create convincing historical video is included in the app right down to the ubiquitous time stamp feature with that wonky raster font.

And if you have any retro or retro-style videos with that you'd like to share with the world, send them to me so I can post them here on the site. Enjoy!

Ever wish you could see your favorite movie or TV series remade into an old school Nintendo-style video game? Well now you can with CineFix's 8-Bit Cinema series on YouTube.  A partial list of their remakes includes Jurassic Park, Big Lebowski, Terminator 2, Happy Gilmore, The Shining, Frozen (for the kiddies) and even The Walking Dead. While a more anally-retentive nit-picker would point out that some of their productions tend to lean closer to the 16/32-bit era art-style, I won't do that here.

So enjoy the videos and check out the links below for even more CineFix craziness. Sorry for the pre-roll ads, Google are greedy bastards.

CLICK HERE TO VISIT CINEFIX
Posted by Marko at 5:30 PM No comments:

When I was a kid back in the 1980s, I remember being in the back seat of my parents' car, probably on our way back home from the mall, and listening to two guys on the radio prattling on with some "back in my day" rant -- kind of like this blog. At one point, during the laughter and comedy, one of the DJs says to the other "if your kid comes back from summer camp with a tan this year, it's because they moved Pac-Man outside." The idiot kid I was, I immediately sat up in my seat and inquired of my father as to just exactly where this awesome summer camp was where they play video games. "It's a joke, son, they were joking" was all I got back.


Well as it turns out, there actually was such a camp, sort of.

Back in 1982 our old pal, Atari, decided to throw their fortunes at a risky proposition (they were great at doing this) by investing in a series of computer camps across the U.S. called, of course, Atari Computer Camps. I never got to meet anyone that actually went to one, and at nearly $3,000 for a week's stay that's not a shocker. Keep in mind, $3,000 back in 1982, adjusted for inflation, would be about one kajillion dollars today. So you know, that one super-duper-rich kid in your school probably got to go. Along with the normal camp activities, swimming, baseball, volleyball, weaving, bonfires and sing-a-longs, kids got to learn how to program and operate Atari 8-bit computers, thereby positioning the next generation of kids to be well-informed future-consumers of all things gadgety and technical. I would have LOVED it! Legend has it that all of the remaining E.T. carts that weren't buried in that landfill in New Mexico were used to stuff mattresses at the camps while the instruction manuals were stacked high in the commodes for, ahem, personal use.

Want to know more? Then watch this historical document:

Oh, and there's a mini-documentary on the subject as well. Have a gander at this:

Still not enough? For even more info check out the links below:

CLICK HERE TO READ AN ARTICLE FROM ANTIC MAGAZINE, OCTOBER 1982

CLICK HERE TO READ AN ARTICLE FROM ATARI CONNECTION, AUGUST 1982

CLICK HERE TO CHECK OUT OFFICIAL ATARI LITERATURE INCLUDING BROCHURES

Smartwatch, you say? Why, that's the buzzword of the day! You think Apple showed us the way? Better take a look at yesterday!

CLICK HERE TO READ MORE ABOUT THE IBM WATCHPAD
Posted by Marko at 3:35 PM No comments:

Back before high-school geeks had computers to get all wet over, they fiddled about with what used to be called stereos or hifi sets. These were modular systems designed to play back music and other recorded audio in the comfort of one's home, without all that tedious trekking back and forth to the village bandstand just to catch the latest Sousa march.
So for the sake of historical record, vintage tech-head, Joe Roberts, decided to detail his personal epic-obsession with stereo gear, that began in the 1970s, on his homepage - which is an old fashioned word for "blog." Yup, his page has been up on the information superhighway since way back in 1998, you know, back before it sucked.
So click the link below to take a trip into the ancient world of patch-cord spaghetti and grey-backgrounded web pages and who knows, you might even learn something along the way! Knowledge is power!

8-Bit musician Joe Jeremiah mixes it up with some Doctor Who. You can check out some of his original music here: https://soundcloud.com/joejeremiah. Enjoy!

Video stores and arcades. We used to love them. Now they are gone. Check this out.

Another day, another drive. Retrogeekers, be careful on your morning commute today.

The crap in your husband's man cave might be worth something

When your hubby finally kicks it, and you're just dying to get rid of all that crap he's accumulated, have someone in the know, perhaps his best surviving friend, evaluate the junk before you haul it off to goodwill.

Read: Apple I discarded as junk sells for $200,000; mystery woman stands to get half 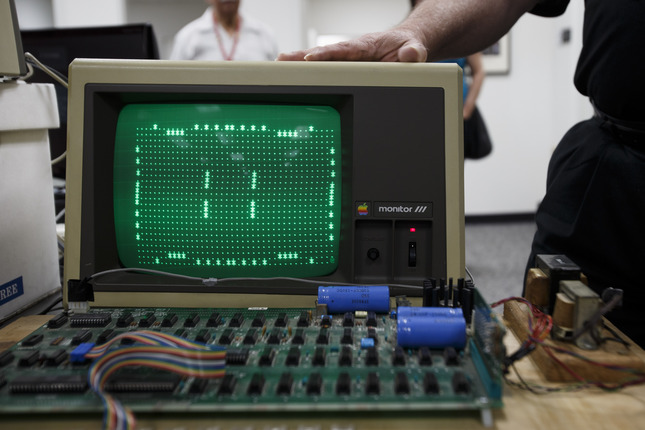 PS - I know this post is sexist or something for addressing retrogeeker wives without including husbands of female retrogeekers, same-sex marriage. Please just assume everyone is included.

PPS - for more on the early days of Apple and the Apple 1, don't miss this retelling by the founders themselves. It'll have you singing:

Apple II forever. Bringing the rainbow to you.

Had enough? No? Well then, here the full Apple ][ Forever extended mix, culled from the IIc launch event.

Next time your mom picks you and your friends up from the mall after a 4-player Gauntlet marathon, she will inevitably ask "What are these videogames all about?" No longer must you strain your brain translating this cultural phenomenon to mom-speak; channel 7 in Los Angeles has got you covered with a complete primer for adults. KABC 7 reports on the true story of arcade games from the perspective of game manufacturers, the industry's existence validated by its massive intake of coinage.

Lest you think this series is unbalanced, it also provides hard-hitting investigation of arcade dangers - both the potential for physical injury as well as psychological addiction. Join Tawny Little and Jack Mittle on a truly bizarre exploration of the 80's generation's favorite past time.

Join Tawny Little and Jack Mittle on a truly bizarre exploration of the 80's generation's favorite past time.
Posted by Kato at 10:36 AM 1 comment: