Before the Indiana-based pizza chain attempted to go national, they were a reputable pizza-monger, known to locals for quality food and a groovy, dimly-lit atmosphere. All locations' windows were covered-over with wood slats to ensure darkness, facilitating movie projection on the walls. Even in the blistering hot midday sun, one could find cool air-conditioned darkness at a Noble Romans. It was too dark in there to see what you were eating. but it tasted good.

Non-hoosiers were introduced to a different face of NoBo's as they expanded into neighboring states–buying up failed Godfather's Pizza locations–and actively competing for the Guinness Book award for least edible, most-nauseating pizza in the known universe. Having eventually achieved that ignoble recognition, they moved on to a "take and bake" business model, and were never frequented again by anyone who likes pizza. Technically they remain in business to this day, but not in a form recognizable to early patrons.

Before they were terrible

A close friend who left Indiana in 1983 randomly asked me about Noble Romans recently. I had to break the news; they no longer existed. We reminisced for a bit about the restaurant's early features:

Apparently, I drive past a Noble Romans on my daily commute, its existence barely on the periphery of my consciousness. But after that phone call, something made me glance over as I drove past. I noticed: the windows were covered. The Italian state emblem was on the windows just like the one frequented in my childhood. Could this be a Noble Roman's throwback location? I began my research.

Reviews of this particular location on Goole Plus Local confirm:

Reviews at Yelp of the same location mention:

Armed with coupons, I'm sending in a crack team of investigative eaters to get the story. Readers of Retrogeeker will get the scoop first. Stay tuned...

Update: A+. In the evening, (of this post,) I convinced the family to give it a try. It felt like nothing had changed since 1986. Each table had its own roll of paper towels. The restaurant layout was the same with the step stool for kids at the glass window into the kitchen, rotating oven, no other windows in the restaurant. No candles (might be a faulty memory) but stained glass Noble Romans lamps over every table. Some old Capcom machines from the early 90's. 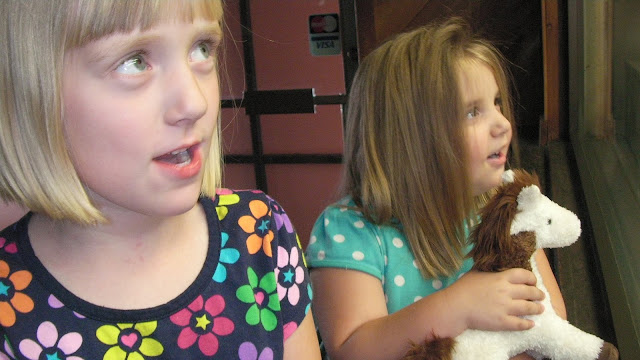 Jocelyn & Amelia peering into the kitchen. First time they'd seen hand tossed dough and I was lucky enough to snap a pic at just the right moment.
Posted by Kato at 3:44 PM