Into the Fox's Den 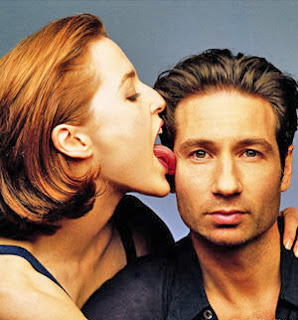 So it seems that long-time co-workers, David Duchovny and GIllian Anderson have finally done what their on-screen X-Files personas could never accomplish. Yup, they're dating. There's even reports that the two have moved in together and Gill's kids are now living with the Kalifornia star (no not Californication, Kalifornia, which is better anyway). Here's a quote I stole off of Geekologie:


"A source exclusively told CDL that David and Gillian have been in a serious relationship for some time now and she and her children are shacking up with the Californication actor. This is a long time coming for the pair whose chemistry on their hit show was always a source of tabloid conjecture. Gillian and David worked together from 1993 to 2002 and starred in the movie version in 2008. Although it seems every fan in the world wanted to get the two together, a relationship was never declared during filming."

Now, I've been doing some web-digging, and it seems that this is mostly conjecture and the reports have all been from way-sketchy sources - plus their publicists are denying the whole thing - but the public doesn't care! This is geek-couple royalty we're talking about here and it's been a few years since we've had a good Mulder-And-Scully-Are-Doing-It story! You can read about it more HERE by searching Google.
Posted by Marko at 11:57 AM