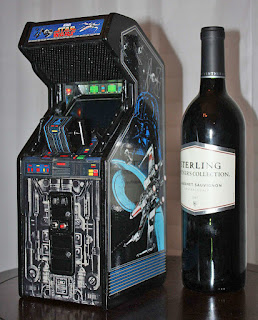 In 1983, the Star Wars franchise was still quite the Hollywood juggernaut as the final installment (or so we thought) of the classic space saga had just been released and moviegoers everywhere were lining up in droves to find out if Darth Vader was really, in fact, Luke Skywalker's father (SPOLIER ALERT: He was, and also Chewbacca turned out to be his sister). Now, the other pimply-faced-teen-oriented money-making powerhouse at the time was none other than the venerable Atari Corp., who had previously been responsible for many of the world's best-loved arcade titles, such as Asteroids and Centipede, as well as some of the worst, like E.T. Little did they know at the time that their hitherto unstoppable cash-machine was about to come to a grinding halt, precipitating the North American Video Game Crash of '83. But just before the proverbial shit hit the metaphorical fan, they managed to release several more classic arcade machines, not the least of which was Star Wars, a game that successfully married the action-packed wizardry of Atari with the spectacular imagination of George Lucas. While of course it's considered to be fairly simple by today's video game standards, Star Wars still holds up as a competent first-person space-shooter that eschews pure realism for good old twitchy fun. So fun, in fact, that a very clever fellow, who goes by the name of Le Chuck, decided to build his own Star Wars arcade machine to have around the house. Well ol' Chuckie must have been short on space because he ended up making a 1:6 scale version of the game which, at 12 inches high, makes a great companion piece to any standard 12 inch action figure, which can be seen HERE along with several other photos of this minuscule masterpiece (worth it). Check out the (somewhat long) video below to get a peek of it in action - yes, it is fully functional including the custom-built steering yoke. And make sure you catch the last 2 minutes if you'd like to see a slide show of the building process. If Le Chuck ever decides to sell this thing, it'll be number one on my Christmas list.