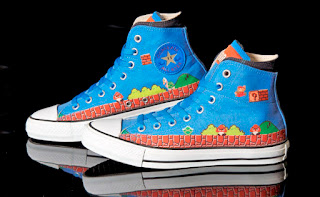 Last year Nintendo, a one-time playing card manufacturer, teamed up with Converse, makers of quality footwear since 1908, to produce a series of Mario Bros-themed Chuck Taylors which include elements of 8-bit art from the 1985 blockbuster video game. The kickin' kicks also feature retro Nintendo fonts on the insoles, special Mario-style stars and even hidden game levels beneath the double-layered ankle panels. Reportedly the shoes sold out the first day that they were released in Japan and have already begun to command ridiculously high prices on the collectors market. If you really want a pair badly enough, head on over to eBay and you can pick up a brand-new sealed pair for only $799. Free shipping, of course.

CLICK HERE TO CHECK OUT THE LISTING ON EBAY
Posted by Marko at 1:30 PM