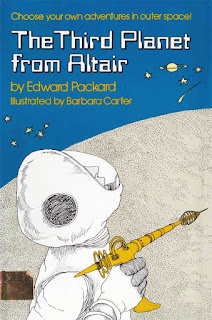 When I was a kid, one of my favorite books to kill time with was the children's science-fiction classic, Third Planet from Altair (1977) by Edward Packard. It wasn't an ordinary book that you read straight through from beginning to end, but rather an early example of children's literature which employed multiple-plot narratives – that is to say, the story was written in such a way that it allowed the reader to choose how the protagonist reacted in certain situations which invariably lead to new and unpredictable outcomes. This meant that you could read the book over and over again and never experience the exact same story twice. Needless to say, this innovative style, which was popularized by Packard himself, struck a note with young readers and ultimately became a significant influence on the development of the game-book genre in the 80s and 90s. Eventually, many other books by many other authors were added to the series, which became known as "Choose Your Own Adventure," and plenty of clones from other companies were introduced as well such as game-guru Steve Jackson's "Fighting Fantasy" and the "Find Your Fate" series, which featured James Bond and Indiana Jones. Well thanks to University of Maryland student, Greg Lord, we here in the future can now take a closer look into Third Planet from Altair utilizing a unique macro view that demonstrates how the pieces of a "Choose Your Own Adventure" plot all fit together. Along with a flow-chart that maps out the entire story and details each pitfall, Mr. Lord also provides an interesting and detailed analysis into the shaping and construction of such a story and even some insights as to how it relates to hypertext, the basis for all modern web pages.

You can check out his site HERE. 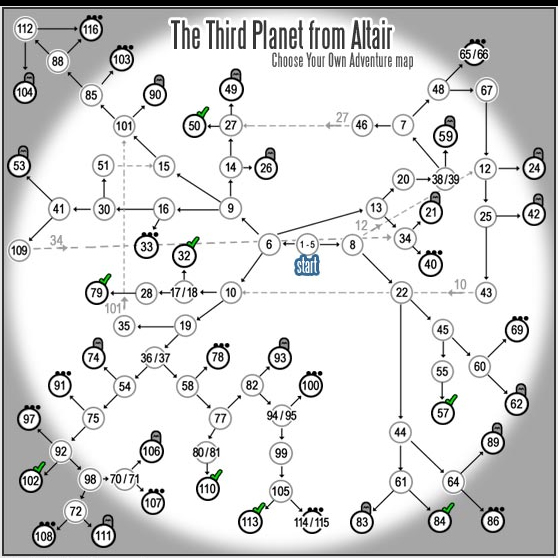