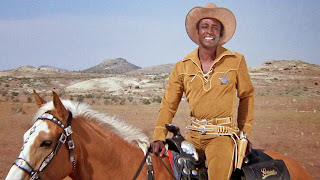 21 years ago today, actor Cleavon Little passed away at age 53 after having lost the battle with colon cancer. While he was featured in many films, plays and musicals during his lifetime, it's still amazing to think that this Julliard-trained thespian's best-known role was that of Sheriff Bart in Mel Brooks' classic comedy, Blazing Saddles (a role which was originally meant to go to Richard Pryor). The world is a strange place. Check out the video.