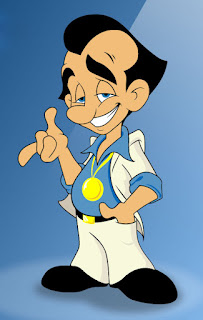 One of the most popular computer game series of the 80s and 90s, the tongue-in-cheek (or hand-in-pocket) humor of Leisure Suit Larry in the Land of the Lounge Lizards was a hit with juveniles of all ages. The game began its life as a basic text adventure for the Apple II called "Softporn Adventure" released by Sierra Online in 1981. Digital titillation being a rather new form of entertainment in the early 80s, the game was, of course, a huge success, prompting Sierra to task now-legendary programmer Al Lowe with the honor of rewriting the game to utilize a graphics engine (read: digital boobs). The result of Al's hard work was perhaps greater than the sum as the oddly endearing protagonist of the game, Larry Laffer, or as he is better known, Leisure Suit Larry, unexpectedly became a very marketable property. Five sequels (some say six) and millions of 5.25 inch floppies later the original series finally came to an end in 1996. After many years of dormancy, several questionable Larry adventures eventually appeared on Xbox and Playstation but they lacked involvement from the original creators and dropped most of the naughty-but-not-dirty humor of the classic series by replacing any potential instances of "clever" with "cleavage." Good eye-candy, to be sure, but weak gameplay. As one would expect, these titles sold poorly (they wouldn't even take my copy of Magna Cum Laude at Game Xchange, true story) which sadly brought the entire franchise to a screeching halt. Boo. But here's the part where the little indie developer swoops in to save the day. From Wikipedia:
And then:
Yup, they even got old Al Lowe to come back. Click on the links below. You know you want to.

CHECK OUT THE OFFICIAL SITE FOR ALL THE SLEAZY DETAILS