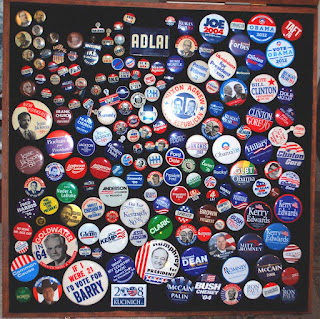 Before the proliferation of media sound-bites and political viral-videos, our would-be leaders used to lie to us using a much simpler and spunky technology called the "campaign button," first shown off by George Washington at his inauguration in 1789. Oh sure, you still see campaign buttons from time to time, pinned to both militant nationalists and radical revolutionaries, but in this world of internet fireside chats and Twitter-based campaign fund-raising, the quaint art of button-sloganeering has really fallen to the wayside, allowing only the most mundane and politically vague war-cries such as "BELIEVE IN AMERICA" or "HOPE" to occasionally surface. Ugh. Where's the whimsy? The boisterous pride? The lightly-barbed attacks? Whatever happened to slogans like "A used FORD is better than a new CARter" and the anti-McCarthy favorite "Joe Must Go!"  Well we've lost our cojones, I suppose. Mass culture-sanitation, thanks to Facebook. You know everything bad on the internet is Facebook's fault, right? OK, just making sure. So in the spirit of the 2012 election year, I suggest you visit the APIC website, home of the American Political Items Collectors (just rolls off the tongue, doesn't it?) for a peek at the information super-highway's most robust collection of resources and information regarding, um, collectible American political items (cue the crickets for about three seconds). Or if you just want to take a look at some awesome old campaign buttons for sale you can visit the site, Older Campaign Buttons (again, an inspiring name). Vote early! Vote often!