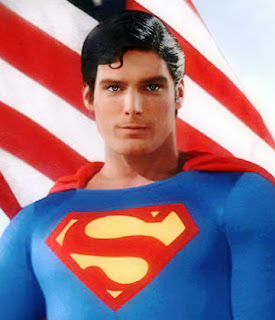 The whole geek-community is going on and on about today being the birthday of one of science-fiction/fantasy's most celebrated actors, Mark Hamill, better known of course as Luke Skywalker. And that's great, we love Jedi Masters here at RetroGecko, but let's not forget the other science-fiction/fantasy actor who was also born on September 25th, 60 years ago today. His name is Christopher Reeve and he is perhaps best remembered for his iconic portrayal of the kind-hearted alien from Krypton who liked to hang out in phone booths, Superman (aka Kal-El). Up until 1978, ol' Supes had only appeared in comics, radio and TV, aside from a one-off feature flick titled, Superman and the Molemen (1951), starring the previous hero-in-blue, George Reeves (no relation). So when the then-unknown Christopher Reeve was cast as the lead in the first big-budget, summer blockbuster-style telling of the strange kid from Smallville, there was some doubt as to whether or not this relative nobody could successfully uphold the legacy of such an important fictional character. Well, the movie turned out to be an enormous hit and three sequels later there was no question that in the minds of the American public, Christopher Reeve was Superman. In 1995, long after hanging up his red cape, Chris was tragically injured in a freak equestrian mishap. Thrown from his horse during a jump, Reeve suffered spinal damage that left him paralyzed from the neck down for the remainder of his life, until his death in 2004 of cardiac arrest, thought to have been caused by an adverse reaction to an antibiotic. But before his passing, Chris put up one hell of a fight, becoming an international political activist and helping bring awareness to the benefits of stem-cell research, which he believed to hold the key to his eventual recovery. So if you have a few minutes to spare today, check out this interview from 1987 featuring a young Christopher Reeve discussing the Superman movies, film critics, his role in Hollywood as an action hero, and much more - it's worth checking out.  So happy 60th birthday, Chris. As far as I'm concerned, you're still the 'man.