Not Your Father's Action Figures 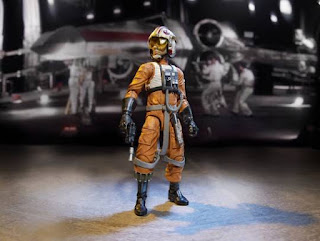 In 1978 a little toy company called Kenner began selling a line of action figures based on one of the biggest box office hits of the time, known then simply as Star Wars. At the time, the figures represented the state of the art in miniatures featuring movable limbs and heads and boasted an arsenal of tiny little blasters and light-sabers available for waging intragalactic war. In time, other action figures from competing toy franchises eventually hit the scene, such as G.I. Joe,  which featured more points of articulation, more artistic detail and better "extras," however, because they were ultimately being sold as children's toys, the craftsmanship of most 1980s action figures was not up to the calibur demanded by serious collectors (read: kids that never grew up). Now, current Star Wars toy licensee, Hasbro, has decided to answer that market demand with the introduction of its new Star Wars: The Black Series six-inch scale action figures.

Slightly larger than their distant Kenner cousins, the Black Series figures feature top-notch sculpting and detailing, previously unavailable to the Star Wars toy market, along with expertly crafted accessories that match their movie counterparts perfectly. Finally you can recreate your favorite scenes from the Star Wars films without having to squint to make Luke look less like a generic toy as the Black Series figures look as much like the actors who portrayed them on screen as is physically possible on such a small scale. While the original Kenner series action figures cost anywhere from $1.50 to five dollars, and the current line of Star Wars dudes chime in at about nine bucks each, the Black Series will set you back a whopping $20 per figure. Hasbro is said to be showing off the new line at the massive annual TIA Toy Fair in New York this weekend. Let's keep our fingers crossed and wallets at the ready!